Is the Interstitium the Mysterious Triple Warmer?

Is the Newly Discovered Interstitium the Mysterious Triple Warmer?

News was recently announced that scientists have discovered a new organ in the body. They are calling it the interstitium. Little is currently known about this new organ and its functions. However, there appear to be many similarities to one of the most mysterious organs in Chinese medicine, the Triple Warmer.

Let’s take a closer look at these two organs and see whether they might indeed be one and the same.

Prior to this new discovery, the dictionary definition of interstitium was“a small area, space or gap in the substance of an organ or tissue” or “The space between cells in a tissue”.

“Space” is the key word for this new organ, which is made up of a series of fluid filled chambers, connected by a strong, flexible lattice of collagen.

The reason that this organ had been overlooked until now is that traditional methods of looking at tissues under a microscope involve draining off fluids. This caused the chambers of the interstitium to collapse and be mistaken for ordinary connective tissue.

It was only when scientists were working on a live patient that they accidentally stumbled across this organ. They investigated further, and found that this network of chambers attached to all the major organs including the lungs, the digestive system and the urinary system as well as blood vessels and muscles.

It is currently thought that the interstitium acts as a shock absorber, protecting the other organs from damage.

It also appears to be involved in the transportation of fluids around the body. It drains into the lymphatic system which plays an important role in immunity, carrying white blood cells to sites of infection and removing waste and toxins.

Because of this, scientists are considering the possibility that the interstitium could play a role in transporting cancerous cells throughout the body. If they are able to prove this theory, then this discovery could open up new avenues in developing novel cancer treatments and better understanding how this deadly disease spreads.

It may also play a role in conditions where fluids collect in a certain area, such as swelling and edema. However, more research is needed on the subject. 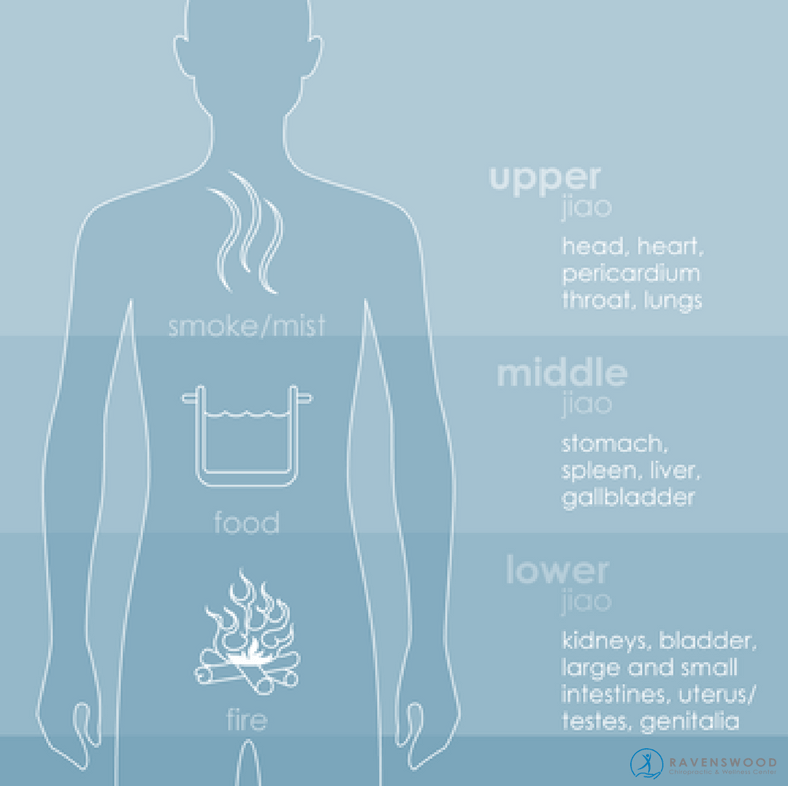 In Chinese, the Triple Warmer is called San Jiao. San means “three” and jiao means “burnt” or “scorched”. It is usually translated as “three burning spaces”.

One of the main functions of the Triple Warmer is regulating the movement of water within the body. According to Chinese medicine, water behaves differently in the three different jiao. To understand this, the body can be compared to a jar being used to ferment wine, which was a popular pastime in ancient China.

In the upper jiao, water behaves like a mist, the gas being given off by the fermentation process. This makes perfect sense, as the Lungs are responsible for breathing in and out the fine mist of air, providing us with oxygen and getting rid of waste. The Lungs also disperse this mist to the skin, keeping it moist and supple.

In the middle jiao, water behaves like a foam, the foam that collects on top of the wine as it ferments. This is created by the churning of the Stomach and the digestive process. Food is broken down here, allowing it’s nutrients to be released and absorbed, nourishing the body.

Underneath the foam, is the wine itself and this represents the lower jiao. Wine often contains sediment, which needs to be separated out from the clear fluid, and this is the job of the Intestines and Bladder. The sediment, or the impure fluid, is removed as waste. The wine, or the pure fluid, can then be returned to circulation.

The Triple Warmer is responsible for controlling this process and keeping the three jiao working in harmony. According to The Yellow Emperor’s Internal Classic (one of the oldest texts on Chinese medicine) it is the “controller of the entire circulation of body fluid”.

The Triple Warmer also plays a role in the circulation of qi. Qi is usually translated as “energy”, but this is not the whole story. While qi does provide energy, allowing us to move and carry out our bodily functions, it also warms, nourishes and protects us. It circulates in channels which can be accessed from the surface of the skin (this is how acupuncture works), but also penetrate deep within our bodies, nurturing every organ.

According to the Difficult Questions chapter of The Yellow Emperor’s Internal Classic, the Triple Warmer “represents the conclusion and the start of the course of qi”. This means that the Triple Warmer has a vital role in circulating not only fluids throughout the body, but also qi.

So rather than being an organ which is a solid mass, or a hollow receptacle, the Triple Warmer can be seen as a passageway, allowing free movement in the channels, the waterways and the bowels. And although it has no physical form, it does play a crucial role in maintaining the health of the entire body.

When the Triple Warmer is not functioning well, this can result in a number of different conditions. Because it covers all of the three jiao, Triple Warmer issues can affect any of the other organs, and because of this, they can be difficult to diagnose. Due to its primary function of circulating fluids, symptoms such as swelling, edema and difficult urination are common.

Are the Interstitium and the Triple Warmer the Same?

It is impossible to say for sure whether these two mysterious organs are the same, but there are certainly many similarities. Neither has a clear, physical form in the way that we generally view organs. Both are distributed throughout the whole body, and both play an important role in the transportation of fluids.

As we learn more about the interstitium, it may become clear that it has even more in common with the Triple Warmer, but for now, we can only speculate. What we do know, is that this new discovery proves that even now, there is much more for us to learn about the human body and how it works.