Our Mission: To Be A Leader In Getting People Better And Empowering Them To Create Healthier Lives. 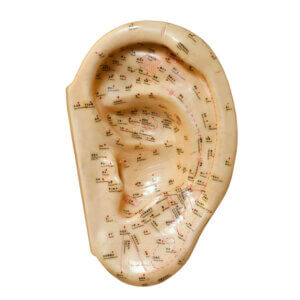 Auricular Acupuncture: A Health Care Alternative for Many Ailments

Acupuncture ear points are commonly used in conjunction with a regular acupuncture treatment but can also be used alone (so you would just have needles or seeds on your ear). Ear points can be used on one or both ears as recommended by Sunae Son,  your licensed acupuncturist in Andersonville. Auricular acupuncture points are located on the outer ear surface (points are never inserted into the ear canal). These points correspond to other areas of the body as represented on the acupuncture ear chart. Auricular acupuncture is thought to work by sending electrical impulse messages to the brain. Ear acupuncture can help treat addiction, detoxifying the body and alleviate symptoms from anxiety, depression, insomnia, ADHD, weight loss, smoking cessation and pain control.

The International Anesthesia Research Society titled Auricular Acupuncture: A potential treatment for anxiety shows “auricular acupuncture at the ‘relaxation’ point can decrease the anxiety level in a population of healthy volunteers.”

Ear seeds or ear beads are typically used following a treatment to reinforce and create longer relief, these ear acupressure points can be pressed to reactivate the point after the treatment and removed by the patient in 5-7 days. The ear beads are made out of either stainless steel or ear seeds from a small seed of the vaccaria plant and are secured by a small piece of adhesive tape.

Call Today to Find out How Auricular Acupuncture may Help You.

We are located in Andersonville with free and plentiful street parking. Evening and Weekend hours are available. 773.878.7330

Learn more about the differences between Traditional Chinese Medicine and Western Allopathic Medicine.

TCM consists of over 13,000 medicinal herbs and over 100,000 formulas passed down through generations – find out more about how Chinese Herbal Remedies are customized for you.

Find out more about cupping, a traditional Eastern medicine practice that helps reduce tension and eliminate toxins in the muscles.

Gua sha technique is similar to cupping, but uses a ceramic spoon or wooden gua sha tool to treat parts of the body where cups aren’t as easy to keep in place.

This type of acupuncture is based on the five elements of nature: fire, water, metal, earth, and wood and is employed to balance energy in the body.

Community acupuncture is an affordable way to try out acupuncture and learn about its benefits for yourself.